I made a game for you to play called Falling Star. You move a blue bat around to catch the falling stars.

It’s a PWA (Progressive Web App) so you can install it on your devices by clicking on the notification that appears at the bottom of the screen. An icon will be added to your home screen so you can play the game whenever you want.

Best of all, Falling Star works on all types of phones and computers.

Falling Star is free to play and provides hours of fun.

See how high you can get… 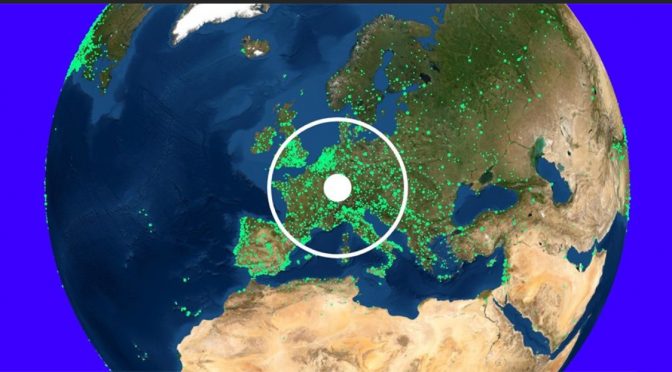 ‘We’re not backing down’, says Treasurer Josh Frydenberg. And who can blame him for wanting to shut down Australian news businesses? Wait! What is he doing? … 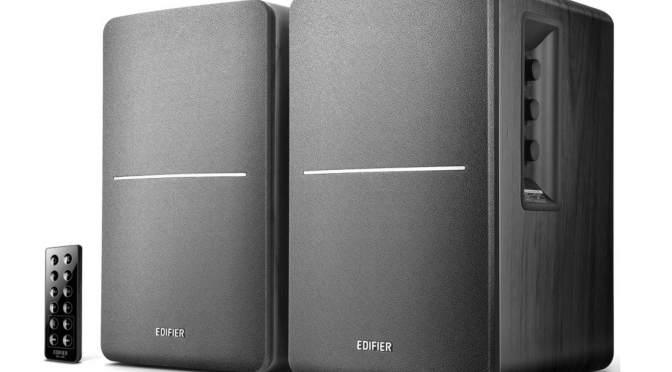 I recently purchased a pair of Edifier R1280DB 2.0 speakers for my . I bought them on eBay for around $140 AUD ($91 USD) with free delivery in Australia. They are impressive-sounding speakers and are quite small. The dimensions of the speaker boxes are 5.75in x 9.5in x 7in (WxHxD). They contain a 4-inch bass/woofer and 13mm silk dome tweeter. They have a claimed frequency response of 55Hz-20KHz, to my hear I’d say that’s accurate. The power output is 21 Watts per channel. With an excellent signal to noise ratio. I’m used to hearing hum and noise coming out of speakers when there is no music coming out of them, when they’re turned on, idle. But these speakers are perfectly silent at those times.

The Edifier R1280DB 2.0 speakers are great if you have a home studio or if you are building one.

They have an infrared remote so you can change volume,  switch between inputs conveniently or turn it on or off.

They can accept input from two separate stereo RCA line-in channels, Coax digital, Fibre Optic digital or Bluetooth. They come with a cable to convert from a 3.5-inch plug to RCA line input for smartphones. So they can be used to listen to just about anything from HiFi stereo systems, smartphones, tablets, laptops, desktop computers and many other devices. I’ve been using them with my Microsoft Surface and my Android smartphone and they sound great. Good solid bass and crystal clear top end. And the boxes are decently heavy, in weight, for such a small box. They don’t cause any horrible vibration sounds that I’ve had with plastic PC computer speaker boxes in the past.

I bought them for the purpose of doing the mastering stage of my new album. Because I composed and recorded the album using a pair of PC speakers, that I bought second hand, and a pair of headphones. Neither if those give an accurate idea of how people will listen to it.  You really need good speakers with good frequency response for mastering.

They have controls to adjust EQ. A treble and bass control on the speaker box and can also be adjusted on the remote.

The very best part of the Edifier R1280DB 2.0 speakers is that they connect to your device via Bluetooth. So no cables, except for the mains power cable of course. There’s also the speaker cable that connects the main powered speaker to the passive one. Bluetooth makes it simple to switch the speakers to another input. In the situation when friends gather for a party they can easily connect their phones and play their songs.

Get your own pair of Edifier R1280DB 2.0 bluetooth speakers from Amazon. 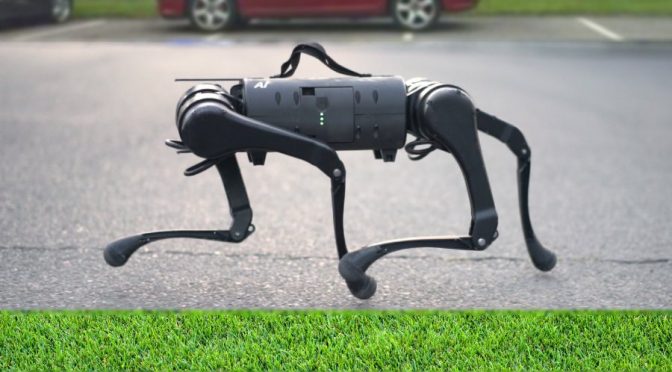 It’s good to see people getting back outside. Exercising, visiting friends, and walking their headless robotic dogs… 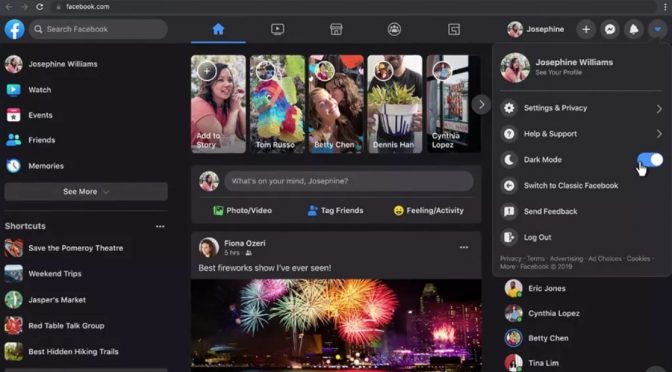 Facebook has introduced Dark mode; it was announced on May 8th. It’s available on the desktop web browser version of Facebook. Probably the biggest change to the way Facebook looks in its 16 years of being online.

What is Dark mode?

Dark mode is a visual theme where most of your screen is a dark colour (usually black) with the text being a brighter colour (usually white). Think of it as the opposite of how most screens display information as black text on a white background. The black text on a white background is similar to how books and newspapers are printed. But when you are looking at a screen for long periods of time it’s easier on your eyes to have the majority of the screen dark and only have the text be the part that is emitting light. It’s similar to the way that the old console like MS-DOS or a shell like on Linux operates.

Dark mode is great if you get sore eyes or headaches from looking at screens.

Facebook said, “Enjoy lower brightness, alongside contrast and vibrancy, with dark mode. It minimizes screen glare for use in low light, wherever you are”.

If you are running Android 10 you can change Android to dark mode in settings and then you can have the Facebook mobile app run in dark mode.

Dark mode is not a modern invention. Originally computers had character-based user interfaces, not graphical ones, and the majority of them were light text on dark backgrounds. Some people may remember in the 1980s, the green CRT screens (or Amber ones) of the Apple ][ computers, Microbees and IBM PCs. The Dick Smith VZ-200 had an undocumented dark mode if you knew how to turn it on. The Workbench of the Commodore Amiga also used a dark mode theme by default, although the background was blue and it wasn’t very dark blue, the text was white.

After using dark themes for many years software makers moved over to light themes. It looked new and fresh. Now after over 35 years of light mode, we are seeing a trend back to dark mode. Will it last 35 years before we all go back to light mode? Probably not.

Dark mode theme has been available on software development tools for many years. Darcula theme on the Android Studio IDE and Microsoft Visual Studio Code editor are good examples. Lately, it has become a trend in web and app development. Android version 10 has a dark mode setting to affect all apps that support that theme. Google announced in May 2020 that it would be rolling out a dark mode for the Google search app across Android and IOS devices within a week. Have a look in the More | Settings area for Theme to give it a try when it’s available.

How to turn on Facebook Dark Mode for desktop web browser version?

Facebook is rolling out a new desktop web browser version. Not everyone has it yet as it is being introduced in stages. When they give you the new version, sometime soon, you’ll be able to turn dark mode on by clicking on your profile picture in the top/right of the screen and turn on the button for dark mode.

Using dark mode can save power and conserve battery life if you are using a screen where individual pixels emit light. Like in an OLED display. But, if you use an LCD screen where the light is emitted from the backplane and not by individual pixels then there is no real advantage for your battery life. It’s just easier on your eyes and looks cool.